Every new information about WAR OR PEACE will be presented here. Stay tuned.
13
Sep 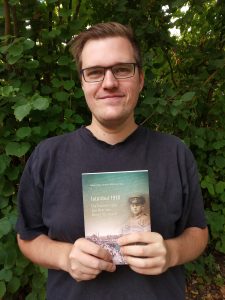 Ruben Gallé was a participant of Europe 14/14 – a 2014 history festival commemorating the beginning of the First World War 100 years ago. With the collected impressions in mind, he followed the path of his great-grandfather’s journey again through the First World War in Turkey and published the diary of his final months of the war as a volunteer for the German Asia Forces. There, he was lucky enough to not get entangled in fighting but to be able to spend his days “strolling thorugh Istanbul” – the title Ruben chose for the book . At WAR OR PEACE he will present his book together with Dr. Richard Wittmann from the Orient-Institute Istanbul. Upfront we got a chance to ask Ruben how he travelled to these personal crossroads of history.

How did you find out about your great-grandfather’s diary?
My father incorporated parts in a radio feature he did for SWR2. It aired on 30 October 2010 under the title “Tausendundeine Nacht schwarzweiß – Istanbul 1918 im Tagebuch eines deutschen Soldaten und in der türkischen Literatur” (1001 night black and white – Istanbul 1918 in the diary of a German soldier and in Turkish literature). After listening to it, I asked my father about the diary, since I was excited to read it completely.

What did you find particularly impressive?
There are several things that were impressive to me. First of all, I was impressed by my great-grandfather`s writing. He makes it quite easy to follow his adventures through Constantinople and imagine this vibrant city and its people. I was also impressed by his open-mindedness and curiosity.

Have you ever had the chance to talk about World War I with him in person?
Sadly I never met him. He died in 1975 and I was born in 1988. My father, who was 20 years old when his grandfather Georg Steinbach died, never really talked about the First World War with him. He didn‘t really know about his history and only learned about his connection to Istanbul when Georg Steinbach returned from a Mediterranean cruise he and his wife took on the occasion of his 50th anniversary working at the Moses Levi clothing retailer in Alzey. This cruise led my great-grandfather a second and last time to Istanbul and he reported about it in a letter to his former employer Karl Levi, who had to flee Alzey during the reign of the Nazis. It was really interesting, to see how these puzzle pieces came together.

Why did you decide to publish the memoirs and what role did the History Campus “Europe 14/14” play in your decision to publish the book?
After reading through the memoirs I just felt like it would be a waste, if this document just stayed private and wouldn’t be accessible for an interested public. Of course it’s a niche publication, but I hope there are some researchers that will be grateful for the opportunity to have an insight into the life and thoughts of a German soldier during his deployment to Istanbul in 1918.
The History Campus “Europe 14/14” strengthened me in following through with this idea, since the instructors of my workshop encouraged me in publishing the memoirs, since they saw them as a quite unique document.

Have you ever been to Istanbul?
I’ve been there twice – for the first time in 2014, when I visited a friend. Then, I had the memoirs with me and would occasionally read them, while visiting places my great-grandfather mentioned. The second time was in 2017, when I and Richard Wittmann, deputy director of the Orient Institute Istanbul, presented the English publication of the memoirs to an interested audience.

How did your experiences compare to those that your great-grandfather had gained?
On the one hand, I think my experience isn’t comparable to that of my great-grandfather, since I was only a short-term visitor to the city and I’m more used to traveling than people were back then. On the other hand, it was still quite easy to be fascinated by the Bosporus and the vibrant city surrounding it.

Do you keep a diary yourself?
Unfortunately I don‘t write a diary, although I’ve considered trying it. It would probably not be written as well as the memoirs of my great-grandfather, but maybe I‘ll try it anyways, since only practice makes perfect. We will see.