Every new information abbot WAR OR PEACE will be presented here. Stay tuned!

“Happy” rolls around the room. It’s yellow, fluffy with wide-opened mouth full of white teeth. Happy is a sponge, empowering its holders with joy and the right to speak – and so they do. From the East to the West, from the North to the South – participants are sitting in a circle. They are all young, but some have already experienced more than enough to be concerned about. An Afghanise man in his late 20s says that women education and unfinished conflicts with the neighbouring countries are the top priority issues of Afghanistan. The Columbian lady who sits next to him strives for a peaceful solution for the guerrilla movements in Amazon. The team is diverse and so is their experience. They aim to describe their definition of peace and define their roles of building the peace.

Bongiwe Ndlovu is one of three trainers from the “Activate Leadership” organization which facilitated the workshop “History vs. Future” during the festival “War or Peace?”. She says that the workshop attendees are brainstorming together on “how to empower themselves as young people so they can be part of the solution for the problems their various countries are facing”. She and her colleagues created a greenhouse condition for the workshop attendees. 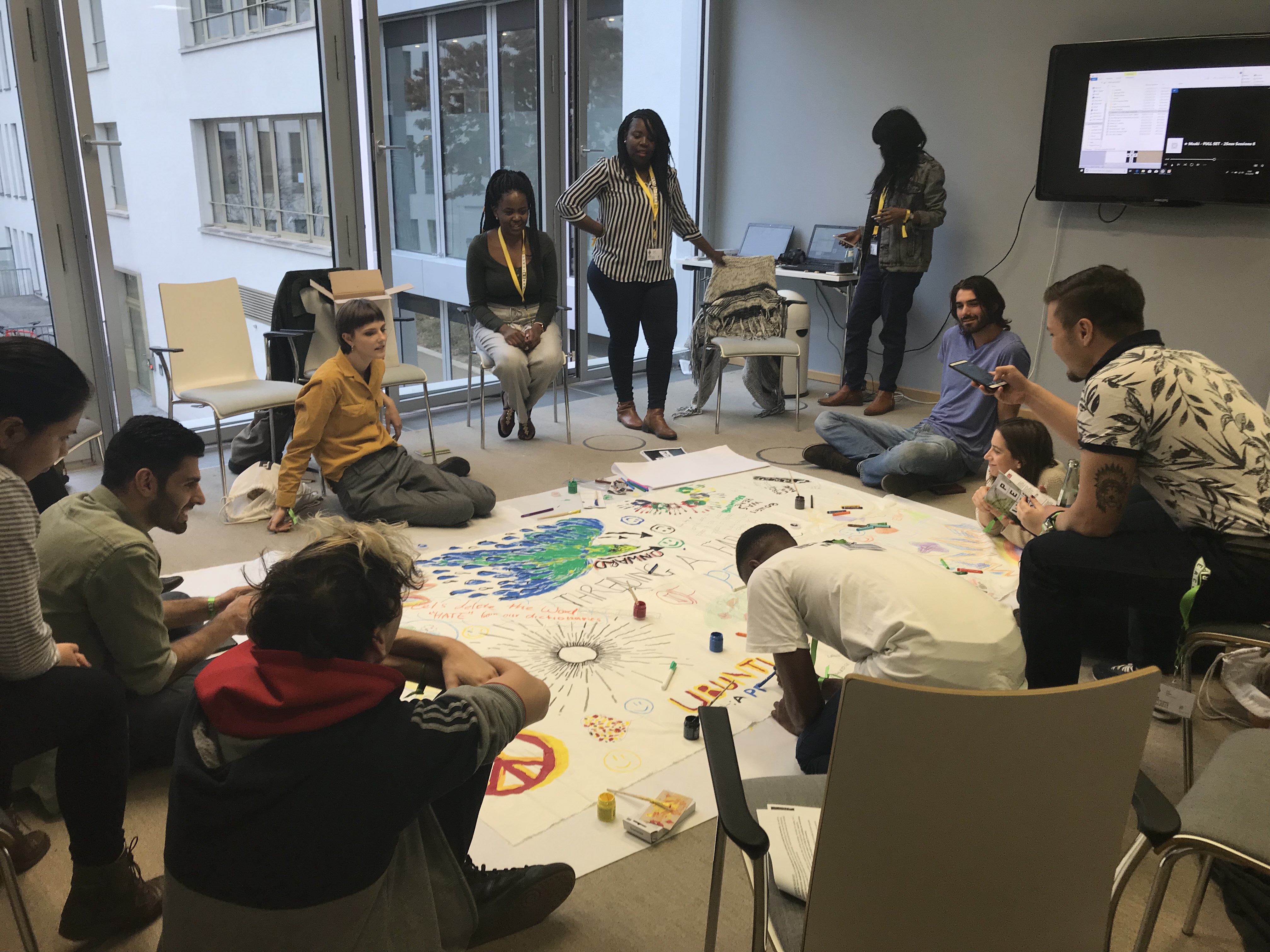 “In Africa we got quit a high rate of protests and most of our protests are violent: people end up with burned schools and public property. Young people are waiting for someone to do the things for them not knowing that we are the ones who must make it happen. We always joke that we came with democracy where minority is leading the majority, because young people present the majority in our case. We were celebrating a centenary of Nelson Mandela this year, but we want the next generations of Nelson Mandela”, Ndlovu says.

White Fabric of Peace is stretched on the floor. Speakers play South African melodies. Colourful pencils are help the attendees to express themselves artistically and “to put their soul” in the painting. Call it art therapy, creative self-expression or whatever but this piece of fabric shows participants understanding of peace.

The French workshop attendee Izabel Schamon, who is currently based in Germany, stressed how our understanding of the past should be included in civic education. “I drew a bird and transformed it to a bird which has tears flowing from its wings. Our modern societies are built on conflicts. Tears represent the pain; however, it can also create strength and those people who have a responsibility of those conflicts shall create a dialogue to peace”.

“I always try to talk about the relationship between the nature and humanity. We tend to forget that we are part of nature. I wanted to paint a plant – but I realized that it could be understood as an expression of fire – a combination of many natural elements. Eventually, we won’t have peace without comforting with nature. It is important that we maintain our ties with the nature” says the Columbian Lorena Romero from the Yauda Foundation. 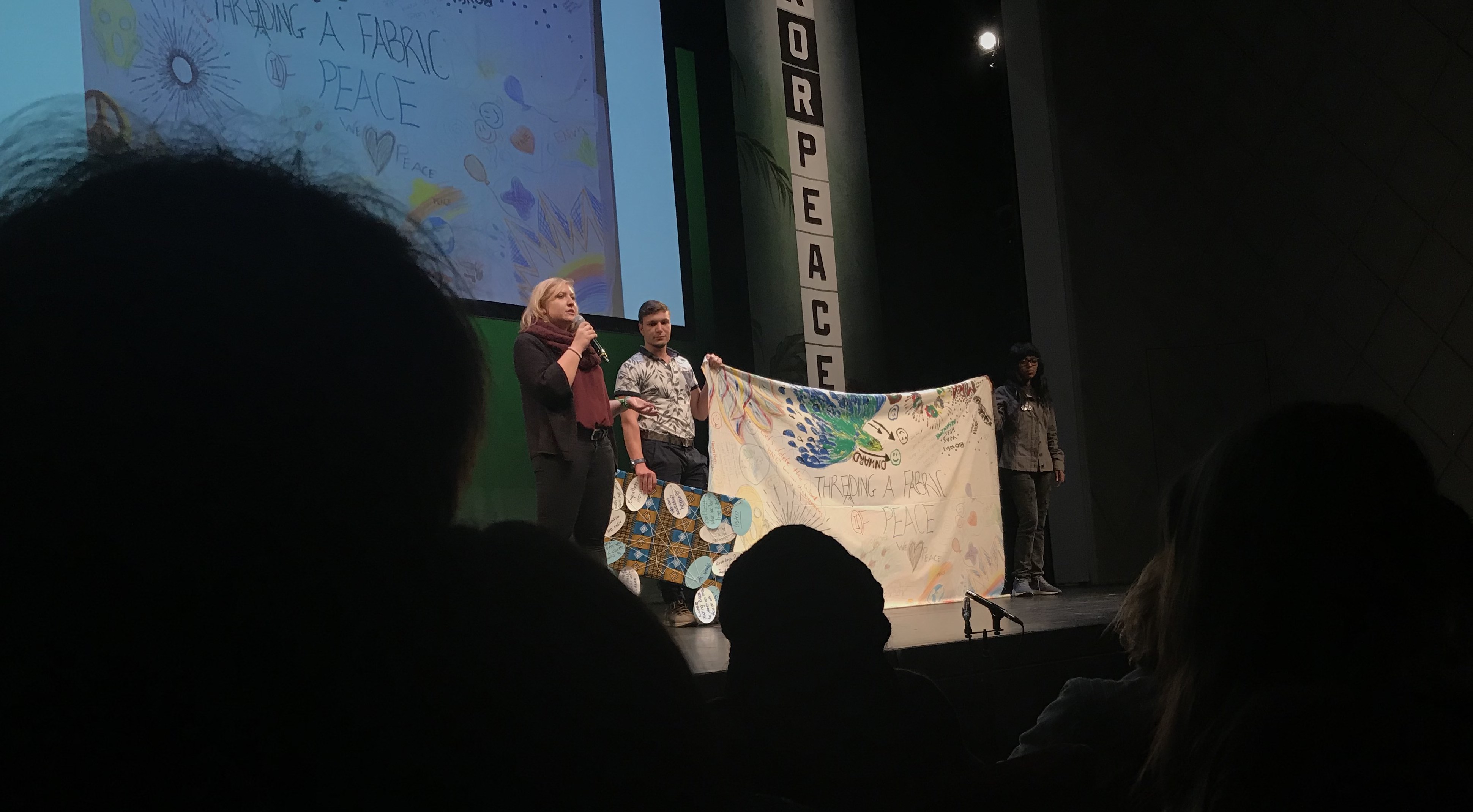 During our talk, Bongiwe Ndlovu seemed optimistic about future and emphasised social media as one of the prominent tools for realizing the purpose of peace. She concluded that “some borders are not physical, but they are in our mind – together, we can overcome these borders”.